In its areas of operation, ALIMA responds to the needs of people who have been displaced due to persecution, conflict, violence, or human rights violations. We  provide medical care and psycho-social support to persons  affected by these humanitarian crises.

According to the United Nations High Commissioner for Refugees (UNHCR), the number of people forcibly displaced from one country to another, or within their own country, has almost doubled in the last ten years; there were 41 million forcibly displaced people in 2010, and the figure had risen to 89.3 million at the end of 2021. This is the highest number ever recorded (Source: UNHCR).

People are considered displaced when they are forced to flee or leave their place of habitual residence –  either by crossing an international border or by moving within their own country  –  because of armed conflict, situations of generalized violence, human rights violations or natural disasters.

people were uprooted worldwide as of May 2022, due to persecution, conflict, violence, human rights violations, or events seriously disturbing public order. That number was 89.3 million at the end of 2021.

of the world’s forcibly displaced are in Africa. On this continent, conflicts are causing record levels of displacement, with 36 million people displaced in 2022. (Africa Center for Strategic Studies)

Forced displacement causes cycles of vulnerability and is a source of post-traumatic stress.  Within informal camps, access to food, water,  sanitation, and health care is limited. In several of our countries of operation affected by such situations, ALIMA teams provide medical and nutritional care, deal with pediatric emergencies, and ensure  mental health as well as psychosocial support for displaced or refugee populations.

ALIMA treats displaced children suffering from severe acute malnutrition with complications such as malaria, respiratory distress and anemia, and provides them with specialized care to improve their chances of recovery and survival. In addition, teams conduct workshops to educate displaced families on best practices linked to health and nutrition.

Among the displaced populations, pregnant women are particularly vulnerable. For this reason, they have access to free prenatal and postnatal consultations, assisted deliveries and family planning consultations.

ALIMA’s medical teams take care of children who require immediate care or risk serious consequences for their health or even their lives.

In addition to routine vaccination, ALIMA conducted vaccination campaigns in IDP camps  during the COVID-19 crisis, for example in Mauritania and Chad.

Get involved with ALIMA ! 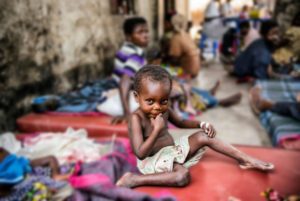 Help us save more lives by donating

Become a member of ALIMA and take part in our projects

Join us to transform humanitarian medicine!